A Chartered Institute of Horticulture ‘Young Horticulturalist of the Year’ regional runner-up, Matt Wood has an eye for innovation. 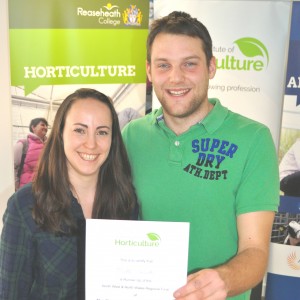 Matt, 26, joined Reaseheath from school and progressed to a Level 3 Diploma in Plant Production, which he completed in 2005. He now runs The Tiny Plant Company based in Weaverham, Northwich with fiancé Susi Boxall and two other business partners.

The couple specialise in growing the smallest variety of as many species of plants as they can, from dwarf Agapanthus to dwarf hostas.

Their obsession with small plants stems from Matt’s hobby of growing Bonsai. He’s shown with the gold medal winning Cheshire Bonsai Society (of which he is membership secretary) at RHS Tatton Flower Show for the last 7 years.

Said Matt “It’s a growing business because gardens are getting smaller and people don’t have the space or the time to maintain large gardens. Container and ‘fairy gardens’ have also seen a surge in popularity in recent years.”

This year Matt and Suzi started their first ever full show season with a stand at the Arley Hall Spring Fair and are also aiming for the RHS Malvern Autumn Festival. They have their sights set on RHS Chatsworth when it begins in 2017 and will then look beyond to RHS Chelsea Flower Show 2020.

Matt also builds show displays for Bowden Hostas and will build their stand for this year’s Hampton Court Palace Flower Show. He’ll also be one of the team leading the build of the company’s stand for RHS Chelsea – a Pullman’s train carriage – biggest ever stand on a showground.

Find out more about The Tiny Plant Company at: http://www.tinyplantcompany.co.uk/

Apply online
Undergraduates go behind the scenes at Badminton