Keepers at Reaseheath College’s campus zoo have been recognised for their success in rearing the minute offspring of one of the UK’s rarest and most spectacular spiders.

Reaseheath Zoo has been awarded a prestigious gold award by the British and Irish Association of Zoos and Aquariums (BIAZA) for its efforts to conserve the endangered fen raft spider (Dolomedes plantarius).

Six hundred fen raft spiderlings were hand reared at the Nantwich college during a three year ‘rear and release’ project aimed at conserving British native species. The spiderlings were kept in individual test tubes and fed with fruit flies and tiny invertebrates for three months until reaching a suitable size for release. They have since successfully established viable new populations in restored habitat.

Reaseheath collaborated with nine other members of BIAZA, including Chester Zoo and ZSL London Zoo, throughout the project and all received a gold award award at BIAZA’s 50th anniversary conference held at Marwell Zoo, Hampshire, earlier this month. Around 6,000 spiderlings were released over four years.

Fen raft spiders are a wetland species found in just three sites in east Sussex, East Anglia and south Wales and can literally walk on water. They feed on a wide range of invertebrates and can also take small amphibians and fish. The survival chances of spiderlings increases to over 90% if they are reared in captivity. 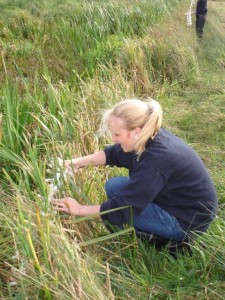 Deputy Head Keeper Lauren Lane led on the project at Reaseheath, helped by colleagues and by student members of the college’s Herpetological Society.

Lauren said: “I am extremely proud that our contribution to this important project has been recognised. It was a rare privilege to be actively involved in conservation work, although it was very time consuming and really tested our skills as zoo keepers!

“The project was extremely rewarding, particularly when we released the spiders into the wild. It was also a great opportunity for staff and students to work alongside major conservation bodies.”

Presenting the awards, Dr Kirsten Pullen, Director of BIAZA, said: “As we celebrate 50 years of ‘Working Together for Wildlife’ we have an opportunity to reflect on the incredibly important work done in conservation and the significant contribution our members make in educating the public about our natural world and inspiring them to protect it. This event has provided us with an opportunity to re-inforce our commitment to animal welfare, conservation, education and scientific research.”

The fen raft spider translocation programme was run through a partnership which included Natural England, the Suffolk and Sussex Wildlife Trusts, The Broads Authority, the RSPB and BIAZA.

• A groundbreaking workshop on invertebrate first aid, written by Lauren Lane and fellow experts, was also recognised for its excellence at the BIAZA award ceremony. The workshop, which received a silver award in the animal breeding, care and welfare category, was introduced at the national conference of the BIAZA Terrestrial Invertebrate Working Group and Veterinary Invertebrate Society last year and has since been rolled out nationwide.

Reaseheath Zoo has over 150 different species including a substantial collection of invertebrates, reptiles and amphibians. It is open to the public every day during the school holidays, July 25 – August 29.