Jack Willgoss, who studied for his National Diploma in Horticulture with us in 2005, featured in the BBC’s recent coverage of RHS Chelsea Flower Show after he and his wife won a silver-gilt medal for their stylish collection of violas.

Jack, who was awarded the title of ‘Best Student’ in his course, went on to train at RHS Garden Wisley where he met and later married Laura Crowe. The couple now run Wildegoose Nursery, home of Bouts Violas, in a Victoria walled garden at Munslow in Shropshire.

They became guardians of the UK’s largest collection of scented, hardy and perennial violas when the original owners retired in 2011.

During his time with us Jack helped to design and build our award winning show garden for the RHS BBC Gardeners World Live show. The garden was much admired by Prince Charles and Camilla, Duchess of Cornwall, when they visited the show. 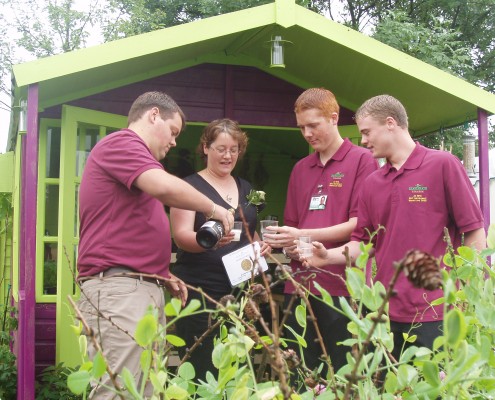 Jack Willgoss (second right) celebrates at RHS BBC Gardeners World Live back in 2005 with the rest of the design and build team.