Chris’s responsibilities include working with horses with behavioural issues by using various methods of training, including equitation science and learning theory; the knowledge of which he acquired during his degree.

Said Chris: “Initially, I was responsible for completing general duties and working alongside our in-house veterinary team to help administer medication and to perform various health treatments. Then in August 2014, I was offered my current post in the Behaviour Unit.”

Whilst studying at Reaseheath, Chris was given the once-in-a-lifetime opportunity to become involved with a project for the BBC’s Countryfile programme.

Chris explained: “I was given the chance to train four completely unhandled, feral Exmoor foals who were owned by Countryfile presenter Adam Henson. Through the application of theory covered in modules, including applied behavioural theory and behaviour and welfare, my team and I successfully trained the foals to undertake daily tasks to a level where they could be handled with ease.

“The Exmoor project was extremely valuable to my current role as it gave me the experience of working with nervous horses. This has been essential when
working with the behavioural projects at Redwings.” 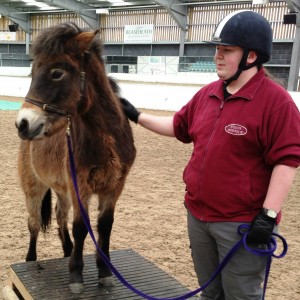