A thought provoking lecture by prominent conservationist Dominic Dyer was followed by informed questions from members of Reaseheath’s Conservation Society.

Dominic, who is known for his debating skills at the highest level, gave a talk entitled ‘Standing Up for Wildlife at Home and Abroad’ to a full audience of students, staff and the public at our Higher Education Centre. 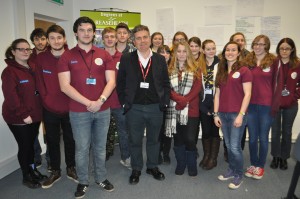 A leading expert on wildlife protection and conservation issues, Dominic is currently Chief Executive of the Badger Trust, Senior Policy Advisor  for the Born Free Foundation and a Council Member for the Royal College of Veterinary Surgeons (Veterinary Nurses Council).

As former Chief Executive of the Crop Protection Association, he is also known for his expertise in plant science and global food security and is a regular speaker and commentator in UK and international media on food security, conservation and foreign policy.

A former civil servant, Dominic described his career working for the government and how he had become inspired to campaign for science led, sustainable policies to resolve issues within the food production, farming and wildlife sectors.

Speaking on the need for the protection of species, from badgers and seals in the UK to dolphins, lions and elephants abroad, Dominic emphasised that educated discussion backed up by proper field evidence was the key to success rather than a reliance on anecdotal evidence.

He said later: “This was a very successful event. I’ve enjoyed talking to young people who are both well informed and enthusiastic about their subject and who are able to have intelligent discussion about  potentially contentious subjects.”

Apply online
Increase your career prospects with an equine degree