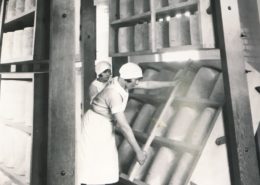 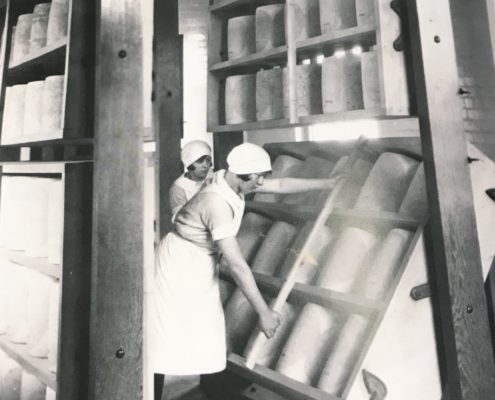 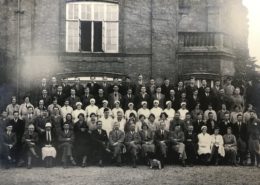 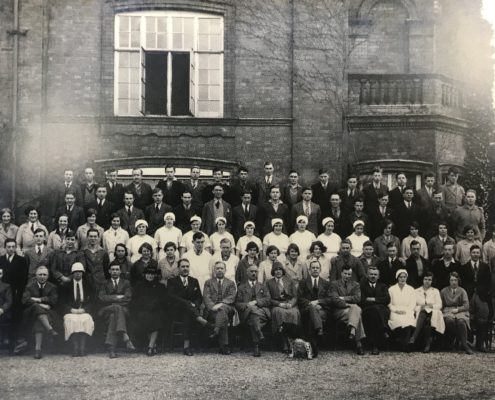 This extract was found in the belongings of a lady called Miss Cash who was a student at Reaseheath in 1926-27.  We are told that she had decided to write about her wonderful year at Reaseheath College, learning to be a dairymaid.

I would like to write my story of Reaseheath.  Why?!  Because I think the women students of that year were rather special.

You see, we were the first to live in the “New Women’s Hostel” which was opened by the Prince of Wales, afterwards the Duke of Windsor, and to use the new dairies.  So not only were we the first residents, we also had the honour of preparing for a Royal visit.  But let me begin with the first day.

We were all to arrive on a certain date in October 1926, any time between two o’clock and four.  We were all ushered into the ‘Common Room’ and when Miss Falder (the matron) ascertained we were all present and correct, we were invited into the dining room for tea.

When tea was over, we were to return to the ‘Common Room’ and when she was free she would pay us a visit, “to have a little talk with us”.  The talk consisted of rules and regulations; I’ve forgotten some of them – but two have always stuck in my mind:

Firstly, at 5.30 next morning, Miss Blackburn (Assistant Dairy Tutor) would come along the corridor make her way downstairs and in an ante room off the corridor, we would find two large jugs of milk and each girl must partake of one cupful.  We must be across in the dairy by six o’clock where Miss Bennion would be waiting for us.  “And remember”, admonished Miss Falder, “Six o’clock, not five past; Miss Bennion insists on punctuality”.

The other rule was this:- “Women students were not allowed in the men’s grounds.  If anyone was caught disobeying this rule, they would be instantly expelled.  Mr Mercer (Principal) was very strict about this and no leniency would be shown”.

But I’m quite sure the male section of the community were not affected by this ruling for many a time and often in the evenings, “hooting owls” were heard only about a yard from the common room windows and they were not the feathered kind, either!  And wolf whistles in every key rent the night air!

And when they departed to their own domain, they always sang and ‘twas always the same song – “Polly Wolly Doodle”.  Why?  I shall never know.  Without the chorus was their way of saying “Goodnight”, because it goes:-

But back to that first night.  We soon made friends and spent a jolly evening.  We were to be in bed by ten o’clock as the lights would all go out then.  There were no mains electric in those days and we had to depend on Jackson Curry (the son of the Farm Manager) to turn the light off and on.  And he was responsible for the generator which made the electric.

At 5.30 next morning, Miss Blackburn came along the corridor tolling her bell.  It reminded me of Gray’s Elegy – “The curfew tolls the knell of parting day” – only it happened to be morning.  But it felt like the middle of the night.

We all arose, full of vim and vigour (and milk) and made our way to the cheese dairy where Miss Bennion and Miss Blackburn were waiting to receive us.

“Now girls”, Miss Bennion said.  “We’re very sorry but the builders have only just finished the dairies and as yet they haven’t been cleaned.  So, as they’re not fit to be used for dairying of any kind without being thoroughly scrubbed down, we thought it would be a nice little job for you all.  Go with Miss Blackburn and she will give you each a scrubbing brush, soap and floorcloth.  And she will also detail you to the different departments.”

Some were given walls to clean but I, and several other unfortunates, had to get down on our hands and knees and scrub cement floors which were splashed with plaster and which had dried on in hard knobs.  Breakfast was to be served at eight and it seemed a lifetime before that breakfast bell went.  But we soon had it clean and shiny and the following week the milk flowed freely into each department and our life as “dairymaids” began.

I was allocated to the butter room the first week.  You did a week in each of the cheese room, separating room, butter room and scullery.  When you were in the scullery, you had to milk the cows and wash all the milking utensils and although I could handmilk, I wasn’t used to those ugly heavy cans that were used.  We had light pails at home which were held between the knees.  These cans stayed on the floor and through a small hole in the front the milk was aimed.  But the first morning the milk went anywhere but through that hole.  My stockings were soaked and my shoes squelched with milk as I walked back to the scullery.

Back to that butter room again, Miss Blackburn was our tutor.  We were each given a churn with cream in and were to churn until our cream resembled grains of mustard seed.  We must keep looking through the little glass window to see how it was “getting on” and on no account must we churn it into a football. That was the greatest crime anyone could commit (in the butter world).

We started off merrily, round and round went the churns.  I kept looking now and then through the window then, without any warning: Bang!  Bang! went something inside my churn.  I saw Miss Blackburn staring at me and then she said in a fearful voice, “Miss Cash, you’ve churned your butter into a football.  Don’t let it happen again!”

As time went on, I managed to keep it in grains but when it came to making it into pats, I was hopeless.  “The ends of the pat of butter must be perfectly square”, said Miss Blackburn.  And as I hadn’t a straight eye, mine never were.

I will now move forward to the day of the royal visit.  Miss Bennion, nervous as a kitten, practising her speech and her curtsey.

“Does this look right, do you think?  And – let me see – I say “Your Royal Highness” the first time I address him and “My Lord” the rest of the time.  Is that right?”.  I happened to be in the butter room for the Prince’s visit and we were to be in various stages of butter-making for his inspection.  I was on the butter-worker, as Miss Blackburn said I couldn’t make any mistake on that.  And, believe it or not, he walked straight up to me and asked me to show him how it worked.  Was I proud?

After the inspection we all had to go to The Hall where the men students joined us too.  I think the photographer was nervous and he seemed to have difficulty in placing us so as not to leave anyone out!  But the Prince was getting fidgety and looked completely fed up and passed some remark.  The photographer took the photo and only half the students were in.  But I was there and still have that photo and also one of all of the students at the end of term which I still treasure.

There was to be a dance in the evening where we would make the acquaintance of the male sex.  It was heavenly.  Everyone dressed up for the occasion in what we used to call our dance dresses and the boys in their best suits and dancing shoes.  Now, nobody bothers to dress up and I don’t think they have half the fun we had.

The dance was held in the Men’s Hall and we were escorted there by Miss Falder and also escorted us home.  We had a dance every Saturday night, always accompanied by Miss Falder, except for the end of term dance and then we were left to stroll back to the hostel with anyone we pleased (male or female).

Miss Bennion taught cheese-making and was very strict; we were all a little afraid of her.  But it wasn’t her fault if we didn’t turn out to be good dairymaids.

I must just mention the separating room.  You separated the cream from the milk with separators worked by hand and you also learned to bottle milk.  The bottles were used mostly by staff.  Miss Blackburn was also in charge of this room and when bottling the milk she would start to count on her fingers, naming the members of the staff.  There’s Morgan, Tew, Woods, Gates, Green and Blackburn.”  And to silly, giggling girls, it used to sound like “Morgan chew wood gates” etc.  She never missed saying this and every morning we used to wait for it and there would be a broad grin on each girl’s face and sometimes a stifled laugh.

The days flew by, friendships were made and romances too.  But it was over all too soon.  The last day of work and the last night to play.  The end of term dance and the end of Reaseheath for us all.  The dance was wonderful, but tinged with sadness.  It was goodbye to all our dancing partners who we may never see again.  And when we crossed hands to sing Auld Lang Syne and walked round and round the hall, we were singing but there were lumps in our throats and tears were not far away.

The next morning, bags were packed and goodbyes were said with vows of eternal friendship and “Don’t forget to write”.  My case was so full, one towel just wouldn’t go in so I got into my father’s car, case in one hand, towel in the other, accompanied by a fellow student who was having a lift home.  The tears were rolling down our cheeks as we drove away and we both shared the towel to wipe them away.  I thought of the song which was popular at that time which somehow seemed to be our signature song; it was “Bye bye blackbird” and I never hear that song without thinking of Reaseheath and those halcyon days I spent there.