Influential conservationist Ian Redmond OBE gave an inspirational talk to student members of Reaseheath College’s Conservation Society and members of the public when he visited the College last week.

Best known for his work studying the mountain gorillas of Rwanda with zoologist Dian Fossey, who inspired the film ‘Gorillas in the Mist’, Ian has been involved with more than 50 television wildlife documentaries and is founder and chairman of Ape Alliance, an international coalition of organisations and individuals working for the conservation and welfare of apes.

The tropical field biologist, whose career spans more than 30 years, is also renowned for his research studies of elephants in both Africa and Asia. During his lecture, Ian described his experiences with apes and other species and also discussed his concerns about climate change.

He also spent time answering questions from students studying for wildlife related degrees and diplomas, many of whom have already or will go on to complete field research with exotic species. 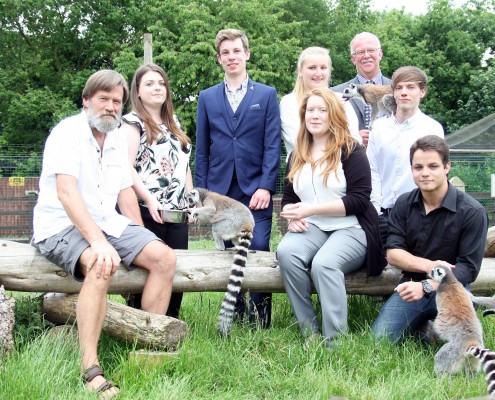 BSc Wildlife Conservation and Ecology undergraduate James Wylor-Owen, who is looking for a research placement abroad, said: “This has been a fantastic opportunity to meet a conservation role model with an incredible background in in-situ research, particularly in human and wildlife conflict.”

Ian, who toured Reaseheath’s zoo before his talk, commented: “This has been a revelation to me. Reaseheath has magnificent facilities and not only provides an excellent home for a range of species found in national zoo collections, but is using them to train the biologists of the future.

“I have been impressed with the enthusiasm and evident knowledge of the students and their wish to make a difference to habitat and species conservation.”

The Reaseheath Conservation Society has over 100 student members who are passionate about conserving animals and the natural world. The group enjoy educational visits and lectures, work with communities on environmental projects and hold public events to raise funds for animal charities. Ian Redmond’s talk raised nearly £800 for Gorilla Conservation.