Eventing enthusiasts had the chance to learn from one of the best cross country riders in the world when Paul Tapner gave a demonstration at Reaseheath College’s Equestrian Centre in Cheshire.

A member of the Australian eventing team and former winner of Badminton Horse Trials, Paul shared his training tips for novice and advanced horses. Riding Counterparty, a seven year-old former racehorse now competing at two star level, Paul demonstrated how consistent schooling over poles and small fences will achieve results with even the sharpest of horses. He also emphasised how important it is for the rider to accurately judge the distance between fences. 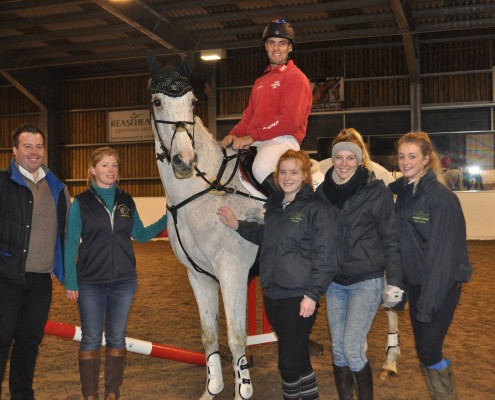 Counterparty, who ran five times under rules, was the 2015 Elite Eventing Champion for the Retraining of Racehorses (ROR) and is being aimed at three star competitions next year. Paul then partnered his top four star horse, 14 year-old Kilronan, to show how he uses the same principles to prepare his more advanced horses for the competition season.

After answering questions from enthusiastic spectators, Paul said: “It’s been a great evening. Reaseheath’s facilities are excellent and you’ve been a fabulous audience.”

Reaseheath Equine Events Co-ordinator Heather Cooper added: “It was a fantastic coup to have Paul here. We hope our visitors went away having learned something which will help them train their own horses.”