The 18 year-old became the first female apprentice to win the prestigious title of ‘Apprentice of the Year’ at the Construction Plant-hire Association’s (CPA) Stars of  the Future Awards.  The competition finals were held at PLANTWORX, a bi-annual showcase event for the UK’s construction industry, held this year in Leicestershire.

Paige had earlier been awarded ‘Level 2 Apprentice of the Year’ at the event and went head to head with other winners to clinch the national title. Nearly 600 apprentices in the construction plant trade were eligible for the competition. 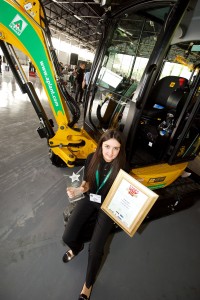 Paige celebrates her awards at PLANTWORX

She received her awards, including a fully-equipped Snap-on tool box, from Richard Noble OBE, a World Land Speed record holder and the pioneer of the Bloodhound Super Sonic Car.

Paige is a trainee construction plant apprentice with A-Plant and is based in Stockton-on-Tees. She specialises in powered access plant such as scissor lifts and cherry pickers and aims to progress into management after gaining more workshop experience.

Paige, who enjoyed maths and science at school, has gone on to receive technical training in mechanical, electrical and hydraulics systems and in welding both at college and in the workplace.  She said: “I think engineering is a great career which I would really recommend to girls.”

Reaseheath Course Manager Simon Keen commented: “Paige is a very deserving winner who thoroughly deserves the recognition. We put her forward for this year’s competition because she has outstanding practical and theory skills, supported by very positive feedback from her employer. She is definitely future management material who will continue to raise the bar for all apprentices.

A-Plant’s Head of Training Bob Harper said: “We are absolutely delighted that Paige has won this national award in recognition of her ability and her total commitment to learning and her work. The Stars of the Future scheme not only rewards outstanding apprentices who will provide the future foundations of the construction plant hire industry, but also recognises those with the potential to become its leaders. We are very proud of Paige for winning the regional and national Level 2 award.”

Reaseheath Engineering is one of the UK leaders in construction plant training. We currently have 172 apprentices and this year saw a record intake of over 120 first year apprentices. We are the preferred trainer for blue chip companies including A-Plant, JCB, Clee Hill Plant, Morgan Plant Hire and J.S. Berry.

We were also successful in the CPA ‘Stars of the Future’ awards in 2013, when James Scott from A-Plant took the title of ‘Best Level 3 Construction Plant Apprentice’ and Level 2 apprentice Adam Hughes from Gunn JCB was a regional winner.