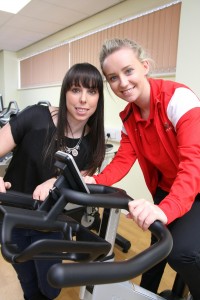 Beth, who started her career aged seven at the Crewe and Nantwich Gymnastics Club, went on to represent Great Britain at three Olympic Games and became a triple World Champion and winner of six European championships and seven national championships before taking a break from competitive sport in 2012. She then became a TV star by winning ITV’s ‘Dancing on Ice’.

During her visit Beth admired the gym’s high tech equipment, which is the same as that used by England footballers at the Football Association’s headquarters, and includes a strength and conditioning zone equipped to the same specification as the 2012 Olympic village. She also watched as serious athletes completed tests in the sports science lab, which has over £40,000 worth of equipment.

The new facility is used to train sports performance and public services students and is used by elite athletes including Crewe Alex FC players. It is also open to all students and staff and local sportspeople can book a personal fitness revue in the sports science lab.

Beth, whose family home is in Bunbury said: “As a local girl it has been great to visit Reaseheath and see the new sports department. It’s brilliant that the college’s sports students have access to such great facilities and can also work alongside elite athletes.”

“Sport transformed my life and it’s good to know so many enthusiastic young people are considering it as a career. It is also great to see all students being encouraged to keep fit as part of their daily routine”.