Big hearted students and staff from Reaseheath College have raised a record breaking £33,000 this year for local charities.

Representatives from the British Heart Foundation, the Student Association’s chosen charity of the year, received a cheque for £26,361 at the student summer ball which was held on the college’s Nantwich campus. The final total was £5,000 more than the original target.

Students and staff have also raised an additional £7,000 for other charities including the Poppy Appeal, the Epilepsy Society, World Aids and Sport Relief.

Student Association (SA) members voted to fund raise for the British Heart Foundation because many had relatives who had been affected by heart problems. They are also aware that heart problems can affect apparently young, fit people.

SA members organised over 100 fund raising events including a fashion show, foam party and activities at Reaseheath’s Family Festival and lambing weekends. Their mascot, Daisy the cow, also met the public at the region’s agricultural shows 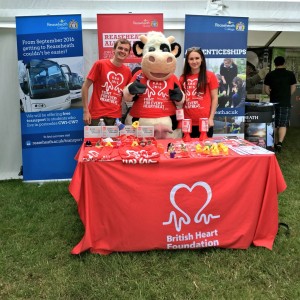 In addition, over 350 students have been trained in cardiopulmonary resuscitation (CPR) with kits donated by the BHF as part of its ‘Nation of Lifesavers’ campaign.

Student Association RAG Chair Tom Allen, a BSc Wildlife Conservation and Ecology undergraduate, said: “I’m very proud of the SA team, who worked really hard to put together a programme of activities which everyone could enjoy. We also had unbelievable support from all staff and students and from the British Heart Foundation itself.”

Michelle Bailey, Area Fundraising Manager for the North West said: “The British Heart Foundation is hugely grateful to the students and staff of Reaseheath College for raising such a phenomenal amount of money.  I have never met a more inspirational group of young people. They have put so much focus and passion into their fundraising. This will make a huge difference to people across the north west who are supported by our charity.”

British Heart Foundation is one of Britain’s largest charities and funds research into improving treatment, diagnosis and prevention of heart and circulatory disease. The charity is funding over 1,000 research projects including a £20 million spend on a number of projects based at the University of Manchester.

Over the past 28 years, Reaseheath students and staff have raised over £248,000 for local charities including Macmillan Cancer Support, St. Lukes Hospice and Broughton House Military Charity.