When our Level 2 Bakery and Patisserie students were tasked with designing a cake for Remembrance Day, they came up with the idea of a ‘weeping window’ of poppies, similar to the display at the Tower of London 2014 commemorating the centenary of the outbreak of WW1. 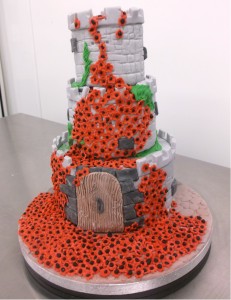 The students discussed, designed and decorated the cake in just one three and a half hour session in our commercial bakery. The cake, named ‘Level 2 Remembers’ was one of several exciting student-made creations which created a lot of interest on Reaseheath’s stand at the Cake and Bake Show in Manchester’s Event City in November.

Among the hundreds of visitors ‘wowed’ by the cake was Royal British Legion member Philip Boreham, who in an email to the college praised the ‘first class, well executed response to the challenge’ and suggested that we send its photo to ‘Legion’, the RBL newsletter, so that other members could enjoy it! 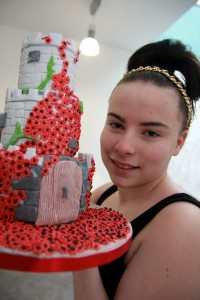 Courtney Potts with her remembrance cake

Course Manager Sam Copeland, who set the challenge, said: “I am so very proud of these students, particularly as this was only their sixth bakery lesson ever! They all worked very hard on the design and the ideas they came up with were really creative.

“Many show visitors stopped to admire the cake and we received a great number of positive comments. Some visitors said they were ‘blown away’ and that they were amazed that the students had come up with such a clever design. We were very pleased that Mr Boreham enjoyed seeing the cake and we were delighted to receive his feedback.”

Reaseheath is one of the few colleges in the country to offer bakery and patisserie courses from Level 2 (school leavers) to degree level. Students are taught in our £7.4 million Food Centre, an industry leading academy with an international reputation in the food and drink sector.

The student who designed the cake, Courtney Potts, is pictured above with fellow student Jade Walker, one of a small group who helped with decorating the cake.