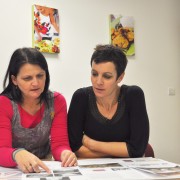 Entries are streaming in for Reaseheath College’s Year 9 Schools Bake Off Competition.

The first heat of the cooking challenge is well under way, with teams of pupils from 42 secondary schools throughout Cheshire, Staffordshire, Manchester, Wirral and mid Wales making final touches to their tasty treats before submitting their ideas before the December 6 deadline. Kings Grove School, Crewe, and Sandbach High School are among local schools who are actively involved.

The schools can enter up to three teams of pupils which must produce a savoury or sweet cake or pastry with a Royal theme. The pupils must put forward their concept on a mood board, backed up by photos of the finished product. Their work will be judged by a panel of Reaseheath food technologists, with marks awarded for presentation and appearance.

The semi finalists will have to reproduce their product in school early in the New Year under the watchful eye of another Reaseheath panel. The finalists will be invited into the college’s specialist  Food Centre on March 20 to recreate their dishes once more in front of a panel of celebrity judges.

The winning team will receive £100 in cash plus two tablets pcs for their school. The second and third prizewinners will receive cash.

Julie Bent, Reaseheath’s Food Training and Communications Co-ordinator, explained: “We invited schools to take part in this challenge, partly because home baking has become so popular and partly to encourage pupils to look seriously at careers in the wider food industry. We’ve had an amazing response. Although many entries have come from food technology departments, in some cases pupils from the whole year have become involved.