Talented Crewe Alexandra FC forward George Cooper has been crowned ‘Apprentice of the Year’ for League 1 in a national competition ‘run by the League Football Education (LFE).

The first team player was chosen over entrants from clubs nationwide for the outstanding progress he made in both his sport and academic studies while he has been an apprentice at the famous Crewe Alex Football Academy.

George, 18, was put forward for the competition after impressing Reaseheath College Lecturer in Sports Performance Lauren Goff, Head of Education at Crewe Alex Dave Whiteside and Regional Officer for the LFE Keith Leighton with his progress both on the pitch and with his college studies. His selection, over ten other football apprentices, was announced at The Football League Awards earlier this month.

George, who lives in Warrington, was offered a three year professional contract by Crewe Alex last April and has played and scored in several League One matches. As well as continuing his football training with the club, he has been studying sports related topics and key skills at Reaseheath College in Nantwich, with fellow Academy members.

He has just completed his Level 3 Diploma in Sport Performance and Excellence qualification as well as Functional Skills at Level 2 in Maths and English.

Course manager Lauren explained: “We put George forward because he has worked hard at his academic studies. He has also shown maturity by the way he has coped with the demands of continuing his education alongside his blossoming career as a professional footballer. He will be an asset in any sporting career.”

George said: “I was surprised and very pleased to gain this award. Although I enjoy playing football, being a member of the Academy and coming to college has given me the chance to study subjects like nutrition and coaching. Thanks to the support from my tutors I have achieved qualifications which will help widen my career choices after I’ve retired from professional playing.” 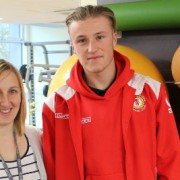 Talented George is Apprentice of the Month 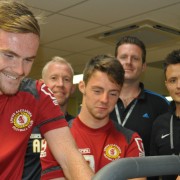 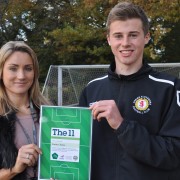 Talented James is Apprentice of the Month