Wearing a fairy skirt over his safety harness Twm, a member of the North West Welsh Opera Choir, sang three carols in English and Welsh from his lofty perch to an audience below on the Nantwich campus. 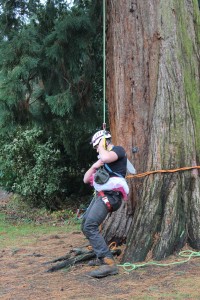 He was supported by former fellow students Rob Hassall and George Gresty. All three completed their Level 3 Diploma in Forestry and Arboriculture at Reaseheath in the summer and now work in the industry.

Twm is running his own forestry and arboriculture service while continuing to gain further engineering skills at Reaseheath. Rob is a self-employed tree climber while George works for a large tree surgery firm. 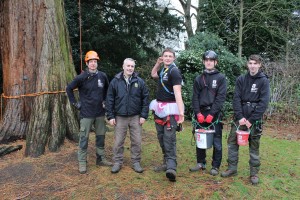 The three friends held their high-rise carol concert to raise funds for the Disaster Arborist Response Team (DART), which sends teams of qualified and experienced tree surgeons to countries that have been hit by natural disasters such as earthquakes. Working alongside other humanitarian relief, DART teams clear trees and debris to ensure emergency teams have safe access.

DART trustee Jonathan Finlow, who is an assessor at Reaseheath and also teaches on the Level 3 Diploma in Forestry and Arboriculture, supported the fund raising effort alongside course manager Alan Mottram.

Jonathan said: “This was a fantastic effort by Twm and his support team, and by all the staff and students who helped and donated to our charity.

“DART is still only 18 months old but we have already achieved so much. We have minimal overheads and great sponsors for most of our kit, so all donations go directly to helping deploy a team to be of use in a disaster zone. As well as raising funds, we had the bonus of enjoying some unusually positioned festive songs.”

Twm has already raised over £500 towards his target of £1,000 for DART. You can still donate to show your support at https://www.justgiving.com/Twm-Brunton/