Cub and beaver scouts from the 1st South West Cheshire District celebrated the group’s 100th birthday with a special cake made by bakery students from Reaseheath College, Nantwich.

The celebration was doubly special because this year is both the centenary of the Crewe based group, which is one of the oldest in the country, and of the cub scout movement nationwide. 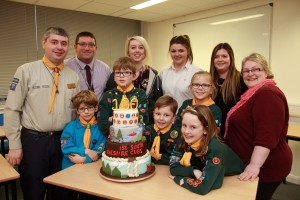 Members and their families were joined by key officials of the movement at a party last weekend at a scout camp at Linnet Clough in Marple near Stockport. The four tier cake, decorated with scouting themes including a tent, campfire, neckerchief, map and badges, provided the centrepiece for the party feast.

Twenty Level 3 Diploma in Professional Bakery students developed the design and produced the cake after a request from Reaseheath Food Technologist Jenny Newall, who is an Assistant Cub Scout Leader of the group.

Said Lecturer and Course Manager Sam Copeland: “I’m extremely proud of the way my students worked as a team and rose to the challenge. Developing a four tier cake to professional standards in nine hours is no mean feat.”

The Ist South West Cheshire group meets weekly in the scout hall in Bedford Street, Crewe, and has a membership of 31 cub scouts, 24 beavers and over 40 scouts.

Tim Owen, also an Assistant Cub Scout Leader, added: “The cake was very impressive and provided the final touch to what was a very enjoyable celebration of 100 years of cub scouting in Crewe.”