Wildlife film makers Madelaine Westwood and Piers Warren are encouraging Reaseheath undergraduates to ‘make a difference’ by recording their concerns about endangered animals on film. 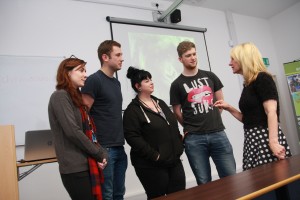 Madelaine, founder of the Great Ape Film Initiative (GAFI), uses cinema and television to spread the message about vulnerable habitats which are shared by apes, other species and people in places like Africa and South East Asia.

Invited to our college as a guest lecturer by Reaseheath’s Conservation Society, Madelaine, who has worked for all major broadcasters in Britain and abroad, told our animal management undergraduates how targeted screenings of GAFI films had been viewed by 300 million people in 15 countries.

The GAFI team, which uses an innovative pedal powered cinema when conventional power is not available, aims to encourage local communities to create solutions which benefit both themselves and the endangered species which share their home.

Audiences range from local school children to politicians. In some cases the film showings result in local solutions or national changes to the law on issues such as climate change and unsustainable clearing of forests.

“Films are a powerful communication tool, particularly when they are backed up by social media, which can have far reaching effects,” Madelaine told her audience. “By getting your message out in a way which goes to the heart of communities, you can change human behaviour and really make a difference.”

Madelaine, who works closely with local non-government organisations when spreading her environmental message, later gave a second lecture which was open to all students, staff and the public.