Talented floristry students from University Centre Reaseheath in Nantwich have continued to prove they are among the nation’s best by taking a bronze medal in the finals of the RHS Chelsea Future Florists with a display inspired by the Royal wedding.

The students, competing at this week’s prestigious RHS Chelsea Flower Show, were challenged to create a floral arch for a Spring wedding just two days after the wedding of Prince Harry and Meghan Markle. 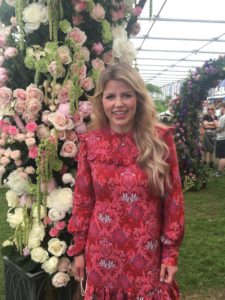 RHS Chelsea Future Florists is a national contest open to all colleges and training institutions. The show itself is considered to be the best in the world and is attended by HM The Queen, other members of the royal family and many celebrities.

Reaseheath’s team of Karen Cope, Marion Downes, Sue Kinsey and Clare Brindle, who are studying for their Level 4 Higher Diploma in Floristry at University Centre Reaseheath, chose traditional scented flowers favoured by the royal family such as roses and peonies in a pink, white, cream and green colour scheme. Their arch was in the shape of the historic Gilebertus door in St George’s Chapel, Windsor Castle, where the royal wedding took place.

The flowers and other materials were sponsored by Redrow Homes, Wyevale Garden Centres and Florismart.

Said Karen Cope: “This was a once in a lifetime opportunity to show off the skills we have learned. It was absolutely amazing to return home with a Chelsea medal, and to have experienced the thrills of competing at such a high level.”

Course Manager and team trainer Fiona Davies said: “The students worked really hard to plan and construct a world-class exhibit for this prestigious show and we are delighted at the result.  I’d like to thank the sponsors, whose support has enabled our students to produce a luxurious creation worthy of the royal wedding!”

The competition is run by the RHS in partnership with the British Florist Association and turns the spotlight onto rising talent within the industry. This is the fourth consecutive year that Reaseheath florists have qualified for the final.

Dave Bexon, Group Sales and Marketing Director for Redrow Homes, said: “Congratulations to the team on their fantastic performance winning a bronze medal at the finals of the RHS Chelsea Future Florist competition. They are such a talented group of individuals and their floral creation for the archway of St George’s Chapel at Windsor Castle was an inspired design.

“At Redrow our focus is on creating communities and valuing people and that includes supporting those in the wider communities around our developments. We’re very proud to have sponsored the students and hope their careers blossom as a result of this success.”

Denise Bossons, Regional Manager of Wyevale Garden Centres, said: “It has been a privilege to support Reaseheath’s florists with their spring wedding arch. Being part of a competition at RHS Chelsea has allowed us to showcase our beautiful products on a world stage. This has been a mutually beneficial partnership and we hope it will continue for many more projects in the future.”