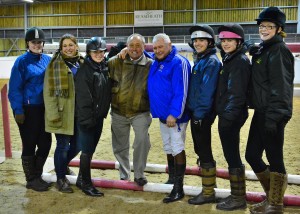 Bob, who was the leading course designer for the London Olympics 2012 and regularly designs courses worldwide, challenged Geoff to jump Olympic size fences on his advanced show jumper Cruise Control.

Geoff, who was an individual and team medal winner with his horse of a lifetime, Virtual Village It’s Otto, also demonstrated the early training of a novice show jumper. Both equestrians described their life story and Olympic experiences, outlining the hard work and dedication it takes to compete on a world class stage.

Earlier in the day they gave a lecture to 80 equine students in Reaseheath’s dedicated Higher Education and Business Centre. As well as describing their own journey to the top, their presentation described the development of show jumping and the career opportunities available in the equine industry and the skills which the students would require to get a rewarding job.

Reaseheath’s equine department has strong industry links and the lecture was just one of a number of events aimed at giving students an insight into potential careers. Reaseheath equine students have worked with Bob Ellis for several years to provide the arena party at the Horse of the Year Show and Bob regularly visits the college to inspire the students and help them run their own shows.

Equine event specialist Alan Beaumont Management, which organised the event, is a supporter of Reaseheath and mentors the students at the Bolesworth Classic showjumping event where they provide the arena party. Geoff Billington has also shown interest in developing training opportunities with the college.

Said Geoff: “I very much enjoyed working with Reaseheath College. The students were very enthusiastic, took an interest in the subject and were keen to learn. I was delighted at the number of visitors who said that they had enjoyed the event. We tried to offer something which was a bit different and brought fun to a serious subject.”