Satender Arya, Chief Executive of the Agriculture Skill Council of India, and Sanjeev Asthana, the council’s Chairman, were in Britain as part of the UK and Indian Education and Research Initiative (UKIERI) project being run with Lantra.

Lantra is the UK’s training organisation for land-based industries and business development and the Agriculture Skill Council is its equivalent in India. The initiative aims to encourage knowledge exchange between educational institutions and to demonstrate how colleges such as Reaseheath help to reduce skills shortages and improve the nation’s productivity through employer-led training such as apprenticeships.

They were invited to visit Reaseheath by Alastair Taylor, a Reaseheath governor who is Chief Executive of the Institute of Agricultural Engineers (IAgrE), and accompanied by Stuart Phillips, Lantra’s Skills Partnership Manager.

Our visitors admired the facilities in our National Centre for Horticulture, the Environment and Sustainable Technology and also toured our food processing halls. Earlier that day they had been to The Skills Show in Birmingham, the nation’s largest skills and careers event. We were well represented there, with a busy college stand and three students competing in the WorldSkills UK national finals.

Said Satender Arya: “We are interested in all  training which is relevant to land-based industries. We have been very impressed with the level of training and the way colleges, particularly Reaseheath, work so closely with the industries they serve. We have also been impressed with Reaseheath’s up to date training facilities in food production and horticulture. 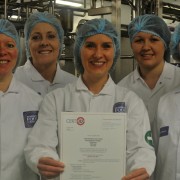 Apply online
Talented students prove they are among the best