The programme showed Level 3 apprentice Jason Smith, 21, being joined by presenter Matt Baker as he carried out the duties of assistant herdsman at his family’s dairy farm in Middlewich. Matt also discussed the benefits of the apprenticeship programme with Jason’s father, Adrian, and watched as Reaseheath Training assessor Anna Hughes carried out an assessment as part of Jason’s portfolio.

Jason was selected for the programme from several Level 3 agricultural apprentices who are studying at the Nantwich specialist college. Reaseheath is a leading trainer of apprentices throughout the north-west and also provides a valuable recruitment service for employers in the land-based sector.

Anna Hughes explained: “Jason is an outstanding student who is both hard working and entrepreneurial. He is typical of many next generation farmers who are learning their skills at Reaseheath and we had no hesitation in putting him forward to feature on Countryfile.” 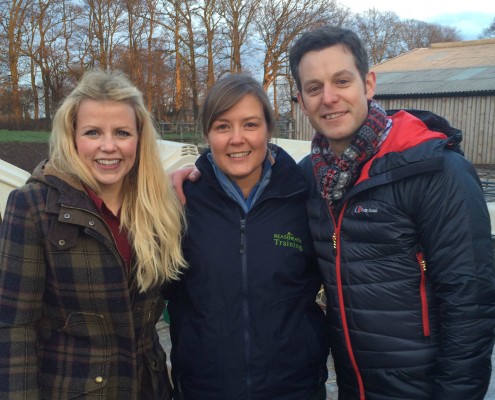 The TV crew also filmed on Reaseheath’s campus, following Jason and fellow apprentices in the classroom during a session on cattle genetics with lecturer Jane Richardson and watching another group as they calibrated a fertiliser spreader and moved expectant ewes through a foot bath. Students were also filmed using a cutting edge tractor simulator.

Jason is the third generation of Smiths to raise and manage the Pedigree Holstein Bostock Herd at Brook House Farm, which is owned by the Tatton Estate. A former pupil of Leftwich County High School, and Sir John Dean’s College, Northwich, he hopes eventually to take over the farm’s management.

He said: “Filming with Countryfile was a brilliant learning curve and great fun.  I’d like to thank Reaseheath for suggesting me for the programme.”

Thousands of employers have benefited from training apprentices. Find out more about how a Reaseheath apprentice could help support your business by registering your interest on our website.