Reaseheath College’s newest halls of residence have been officially dedicated to the man who helped to make the college a leader in vocational training.

Platt Hall has been named in memory of John Platt OBE, the former chair of the Nantwich college’s Board of Governors, who died two years ago at the age of 82. John was Chair of governors for 14 years and a governor for 20 years, during which time he spearheaded over £50m of capital investment on campus

Platt Hall, the latest new build to be completed, opened to students in September. The £6 million building, which has 150 en suite bedrooms including special provision for students with disabilities, bring the total of student rooms on campus to 685.

Construction of the next project, an £8.5 million national centre for horticulture and environmental management, starts shortly.

Describing John as a visionary and inspirational leader, Chair of Governors Emily Thrane said: “John was a true gentleman and a lovely person. He left an enormous legacy at Reaseheath and his spirit will remain in these wonderful facilities. John planted seeds and ensured his vision would endure by giving us self belief and perseverance. He also inspired great loyalty from everyone who worked with him.”

A plaque was unveiled by John’s daughter, Joanna Lomas, and an oak tree germinated by Reaseheath’s horticulturists was dedicated by his son Jeremy Platt.  The building was blessed by the Rev Peter Mascarenhas.

Joanna, of Tarvin, said: “Platt Hall is very impressive. Dad would have been so proud.”

In addition to his support of Reaseheath, John ran a dairy farm at Lostock Gralam and was a leading light in Cheshire’s agricultural community. He was Chairman of Cheshire Agriculture Society for almost 30 years and played a leading role in running the Cheshire Show.

His legacy lives on in the John Platt Travel Scholarship, which enables young people in Cheshire’s agricultural and land based industries to widen their experience through travel. 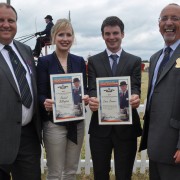 Apply online
RHES fundraise for Crocodiles of the World

Reaseheath burgers get top marks for taste
Scroll to top