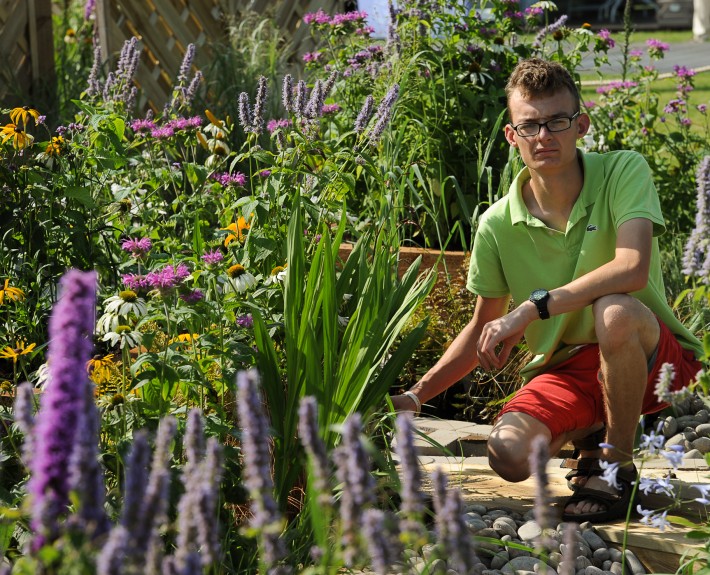 The Landscape Gardening Competition, organised by the Association of Professional Landscapers, is designed to highlight the skills and potential of young people. Finalists are considered for an international squad.

Richard, 19, of Tattenhall, will compete at the Olympic-styled finals at The Skills Show at Birmingham NEC in November against top students from other colleges.

Competitors in the RHS Tatton heat were challenged to build a garden from scratch in 22 hours. The competition was held in sweltering temperatures and in front of the many thousands of visitors who attended the show.

Lead judge Jody Lidgard said; “Congratulations to all the competitors. It was a very close competition and workmanship was high in all the gardens. I have every admiration for the lads, who just kept going despite the heat. They all should be proud of their achievements. They have represented their colleges with pride.”

Richard, a Level 3 Extended Diploma in Horticulture student, was one of a team who designed and built the winning garden at a competition held during Reaseheath’s Family Festival in May. He then helped to rebuild the garden as a feature on the college’s award winning stand at the Cheshire Show in June.

The former Bishop Heber High School, Malpas, pupil said: “Tatton was my first major competition and I can only describe it as being as close as landscape gardening can get to being a military operation. There was no let up at all as we had to complete the garden to a tight deadline.

“But I really like that aspect of the competition and I’m looking forward to building on my skills in preparation for the final.”

Students from Reaseheath College, in Nantwich, carried off several key awards at the RHS Flower Show Tatton Park. An innovate fruit and vegetable garden ‘A Taste of Wythenshawe’, designed and built by Foundation Degree in Garden and Landscape Design students, was awarded a gold medal while student florists took the new Tatton Park Floristry College of the Year title.