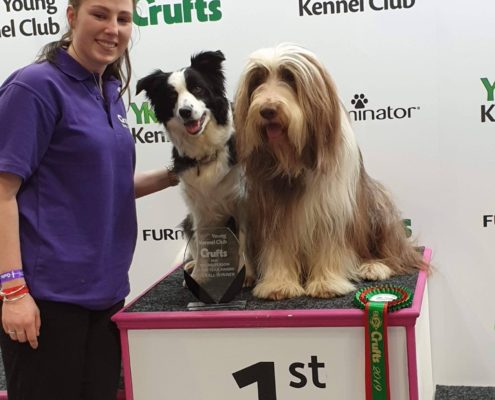 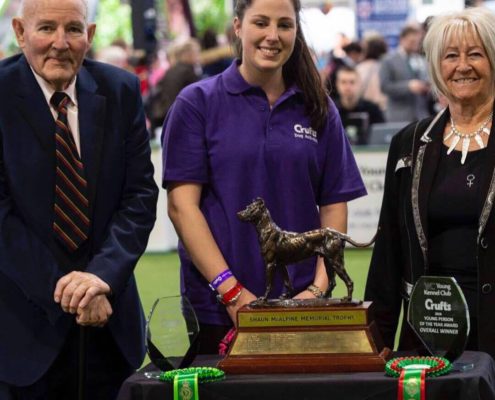 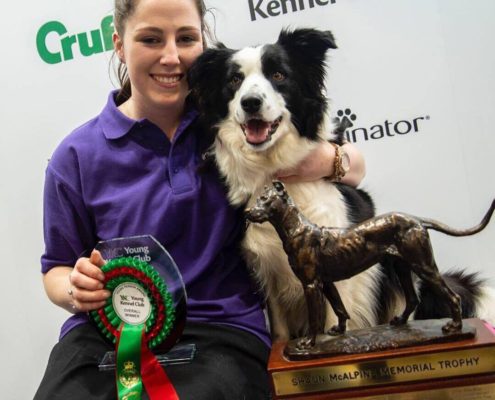 The 21 year-old, who lives near Congleton, was overall winner of the Young Kennel Club’s (YKC) ‘Young Person of the Year Award’ for being a role model to young people and their dogs.

The award, which has been presented annually for over 26 years, recognises the young person who has made the biggest  contribution to the dog world through  hardwork and inspirational and selfless actions.

Paige qualified for the award final by previously winning the YKC’s ‘Good Buddy of the Year’, one of five categories which provide the line-up for the overall title.  Over 11,000 members of the public voted for the category winners to decide the champion.

She was nominated for giving up her time to mentor other young people at clubs and shows locally and across the country, particularly through training for obedience and puppy classes. She also regularly volunteers to help at YKC shows and at the two main events in the dog show calendar, Crufts and Discover Dogs.

Paige was presented with the Shaun McAlpine Memorial Trophy on the final day of Crufts in front of a packed audience at the YKC ring. She also came fourth in the YKC Basic Obedience class and second in the Kennel Club Good Citizen Dog Scheme Pre-Beginner Obedience Stakes with two year-old border collie Pebbles, and second in the Over 18 groom through class and sixth in the YKC 17-24 Working and pastoral handling semi final with five year-old bearded collie Puzzle.

She said: “Crufts is my favourite show and this year it was really special. I was over the moon with how the dogs performed and winning the top award myself was amazing.

“It was a real privilege to be nominated, let alone to actually win it!  I’m proud to have helped so many young people. I’m at every training day, I volunteer and help as much as I can, and to be recognised for that is so lovely and unexpected and emotional. It will be a fabulous addition to my CV and hopefully it will help me build a career in the canine industry.”

Paige has almost completed her BSc in Canine Clinical Behaviour at University Centre Reaseheath in Nantwich, one of few academic institutions to offer dog related degrees.

She has been showing dogs for 11 years and has consistently gained good placings at Crufts in grooming and obedience classes. Eventually she hopes to work as a canine behaviourist.

Paige has another five border collies at home and spends much of her free time training her dogs. She’s a member of the Danesford Obedience Dog Training Club in Congleton, where she practices dog agility and competitive obedience, and she also helps to teach dog training at club level.

Caroline Kisko, Kennel Club Secretary, commented: “Congratulations to Paige for winning this year’s YKC Young Person of the Year award. She is a well-deserved winner and we’ve no doubt she will inspire many other young dog lovers around the UK.”