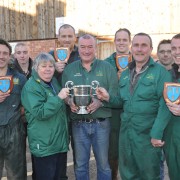 Our farm staff were over the mooooooon last week after receiving one of the most prestigious awards in the Cheshire County Farms competition.

We won the category for best farm over 500 acres, a tremendous accolade as we were judged against some of the best commercial farms in the county. The farm was judged as a whole, with the judges inspecting our dairy herd, pig unit, sheep flock and arable and growing crops.

Awards in this competition are particularly welcome, as the judging panel are made up of farmers who really know the industry.

Farm Manager Mark Yearsley said: “gaining these awards against competition with the best shows what a great farm and great staff we have. We were delighted to win the awards and I’d like to thank the team for all the hard work they put in to make it happen.”

The awards, which were handed over at a dinner at the Civic Hall, Nantwich,  also included a new category ‘Competent Young Person in Agriculture’ which is sponsored by Reaseheath.

This is open to young people aged between 16 and 24 who work on a Cheshire farm. Marks are awarded for enthusiasm, passion, competence, responsibilities and future aspirations. The applicants are judged at their workplace as they carry out their job.

All the young people in the top four places were trained at Reaseheath. The winner, David Marrow, completed his agricultural apprenticeship with us as did second placed Andrew Dodgson and equal third Richard Venables. Will Mansell, also equal third, is a current Level 3 student.