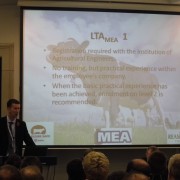 Reaseheath’s successful scheme for training dairy engineers of the future was discussed when the Milking Equipment Association (MEA) held their Autumn conference at the Motor Heritage Centre in Gaydon, Warwickshire.

The aim of the conference was to update representatives on the MEALTA qualification or Parloursafe (as it is now known). This qualification is delivered only by Reaseheath. Currently 412 students are registered on the scheme, with programme leader Mike Cullen delivering the modules at Reaseheath and in the workplace.

The training uniquely bring together engineering, food manufacturing and farming and is aimed at engineers who service and maintain milking parlours  across the country.

Mike himself addressed a capacity audience of nearly 100 delegates at the conference, describing the Parloursafe qualification and how it is assessed at all four levels. MEA Chief Executive Officer Roger Lane Nott reported on the progress of the association. Other speakers included Alistair Taylor, the new Chief Executive Officer of the Institution of Agricultural Engineers and Peter Huijsmans, who spoke about a similar scheme and its success over the last decade in the Netherlands.

Representing the Red Tractor Scheme, Emma Surman highlighted current recommendations and how the scheme and farm assurance will be working closely in the future. The event was chaired by David O’Hare, current chairman of the MEA.

A round of question followed in an open forum, where it was shown that the industry is providing a strong backing to the scheme. Reaseheath’s programme is already proving extremely successful, with 27 Level 2 graduates progressing onto a new Level 3 programme which is starting in the New Year.