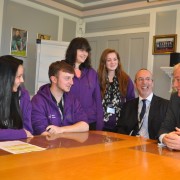 Members of Reaseheath College’s Student Association had the opportunity to question their local MP Stephen O’Brien about things that concern them when he visited campus last week.

Lack of funding for mature Further Education (FE) students, budget pressures on colleges, rising transport costs and the buying power of supermarkets were top of the list during an hour long discussion with the MP for Eddisbury, who is an active supporter of the specialist college in Nantwich.

President of the Student Union Rob Sparkes, a Foundation Degree in Zoo Management student, questioned the inequality between mature students studying for FE qualifications, which are not funded, while there was funding available for mature degree students.

Stephen replied that the government recognised the importance of continuing education and although there was not yet a plan in place, there was a lot of political sentiment not to exclude adults studying at FE level from financial support.

Katie Massey, who is studying for a Foundation Degree in Equine Science, was concerned that colleges faced a difficult balancing act meeting budgets while continuing to deliver quality education.

Stephen assured her that the government realised that land-based colleges, in particular, faced higher financial demands because of the specialist facilities and staff required. To help meet these costs, Reaseheath had been supported through considerable government capital over the past 10 years.

Rising travel costs were a particular worry to Nicole Duggan, a Foundation Degree in Animal Behaviour and Welfare student, who pointed out that this created financial pressure for students throughout their course, during work placements and when they first began their careers. She also felt it restricted where students could study and work.

Stephen replied that the government realised the importance of giving everyone access to college. Reaseheath had played its part by increasing quality accommodation on site and by subsidising dedicated buses throughout its local region.

The students’ meeting came days before Stephen’s appointment to a top job at the United Nations. He is to be the new Under Secretary-General for Humanitarian Affairs and Emergency Relief Co-ordinator, based in New York, after standing down from Parliament.

His new role will enable him to concentrate on improving and giving security to lives in some of the most difficult and impoverished parts of the world. Stephen was previously Parliamentary Under Secretary of State for International Development and was also the Prime Minister’s envoy to the Sahel region of Africa.

Principal Meredydd David said: “Reaseheath is very grateful for the support it has received from Stephen O’Brien during his time as our MP and we wish him well in his new role.  He has assisted the college’s development in a number of ways and we are looking forward to working similarly closely with his replacement.

“Our students enjoyed a full hour’s discussion with Stephen and really benefitted from his wealth of knowledge. All fully recognise the importance of using their vote in the coming election.”