Matt, who heard of his selection last week, joins the GB squad to contest the global, Olympics style final, which runs from 11 – 16 August.

WorldSkills runs the competition bi-annually for students aged 23 and under to showcase the skills and value of young professionals in worldwide industries ranging from construction, engineering technology and transportation to IT and communications and social and personal services.

Off to Sao Paulo: Matt Beesley

Matt, 21, completed his Level 3 Extended Diploma in Horticulture at Reaseheath College in Nantwich in 2012. He now runs his own successful business, Beesley’s Landscapes in Winsford, and employs two apprentices. He first competed in the British selection rounds for WorldSkills while a Reaseheath student and has continued to train intensively as a potential squad member, narrowly missing selection for the world finals in Germany in 2013.

In São Paulo he will be one of two British landscapers who will test their skills and stamina in hard landscaping, plant knowledge and management against the world’s best. 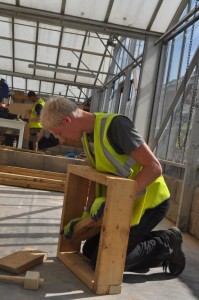 The former Hartford High School pupil said: “Competing and training on the WorldSkills programme has been a fantastic experience for me. I have learned so much and gained such a lot of confidence. I’d particularly like to thank my hard landscape instructor at Reaseheath, Jason Hinks, for his support. I’m now totally focused on the world finals. It would be awesome to bring back a medal.”

Said Jason: “I’m really proud of Matt and how he’s developed as a professional landscaper through WorldSkills. This programme is all about benefitting the students through training and helping them to realise their potential.”

Another team of Reaseheath horticulture students have begun the selection process for the GB squad for WorldSkills 2017, which will be held in Abu Dhabi.

Level 3 Extended Diploma in Horticulture first year students India Hill and Finin Talbot and second year student Christopher Shore have got through two elimination rounds which were run by the Association of Professional Landscapers. They will now compete at the three day semi-finals at RHS Flower Show Tatton Park in July,  in hopes of selection for the national final at The Skills Show, NEC Birmingham, in November.