The students, who are studying on the Nantwich, Cheshire, college’s unique Eden programme, was awarded gold in the Specialist Cheesemakers’ class for a speciality cheddar made by Sarah Roberts, Chris Hay and Jack Parini. A cheese from the same batch also won the highly competitive Student Cheesemaker class after impressing judges with its flavour, texture and creamy after-taste. 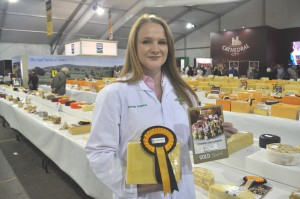 Eden student Georgie Brighton, a trainee dairy technologist from Arla, with one of the prizewinning cheeses

A total of ten cheeses made by Eden students were entered into the show, which claimed a new world record by attracting 5,000 entries from 31 countries. The Student Cheesemaker class is sponsored by Reaseheath College. 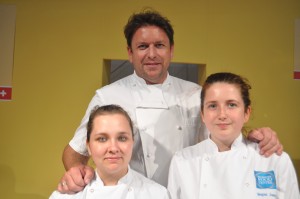 The Eden programme is a unique, ground breaking, education initiative driven and supported by leading dairy companies including Arla, Muller, Dairy Crest and Glanbia, which recognise the importance of investing in talented employees.

Now in its eighth year and delivered exclusively by Reaseheath, the three year course covers relevant topics ranging from dairy chemistry and microbiology to cheesemaking.

Said Course Manager Debbie Heritage-Brill: “We were delighted at the success of our students, particularly against such strong competition from within the industry at a show with exceptionally high standards.”

Apart from competing, the Eden students demonstrated the process of cheesemaking at the show, giving families the chance to see how the nation’s favourite food is produced. They also helped with stewarding at the show.

Megan Jones and Lorraine Murray-Lunt, who have just completed their Level 2 Diploma in Bakery and Patisserie, and former student Elysha Emberson supported celebrity chefs James Martin, Will Holland, Sean Wilson and Peter Sidwell as they demonstrated how to cook tasty dishes in the international cheese marquee.

The students were also busy behind the scenes helping home economist Jill Weatherburn to prepare ingredients.

Find out more about the Eden programme at www.reaseheath.ac.uk/dairy-technology-foundation-degree