Future garden landscapers, including three from Reaseheath, demonstrated their skills at the north west regional heat of the WorldSkills UK competition.

Level 3 Diploma in Horticulture students Nathan Webster, Matt Fletcher and Aaron Byrne challenged students and apprentices from other training providers in tests of block paving and decking construction and were marked on the quality of their work and attention to detail. The competition, run by the Association of Professional Landscapers (APL), was held at Myerscough College. 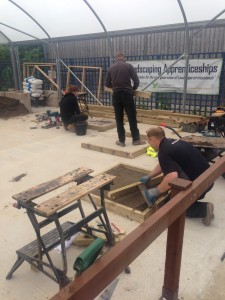 Selection of contestants for the semi finals, to be held at RHS Flower Show Tatton Park in July, will be made once all the regional heats have concluded. The highest scoring competitors at Tatton will  progress to the national final, to be held at The Skills Show at the NEC Birmingham in the autumn.

Jody Lidgard, APL lead judge and trainer said: “The competitors represented their colleges well and produced work to a good standard. This is very pleasing as we are putting all our efforts into increasing the standard of skills coming into the industry.”