Reaseheath students have celebrated success in the prestigious Chartered Institute of Horticulture’s ‘Young Horticulturist of the Year’ competition.

Two Reaseheath trained students were among eight contestants to qualify for the North West and North Wales regional final, held in our new Centre for Horticulture, the Environment and Sustainable Technology last weekend.

The demanding competition, in front of an audience of supporters, tested the breadth of the contestants’ knowledge over ten hard fought rounds with the quickest off the buzzer gaining valuable points.

Matt, 26, joined us from school and progressed to a Level 3 Diploma in Plant Production. He now runs The Tiny Plant Company in Northwich with partner Susi Boxall. Finin, 25, a current Level 3 Extended Diploma in Horticulture student, qualified for the regional final after winning an inter college heat contested by over 30 students. He wants to be a collections manager in a tropical house 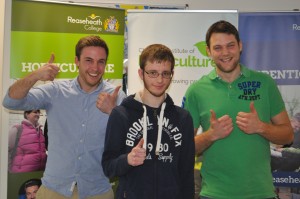 Joshua, 18, now goes through to the grand finals to be held at the National Botanical Gardens in Dublin in May. The national winner will receive a £2,500 travel bursary sponsored by the Shropshire Horticulture Society through The Percy Thrower Trust.

Reaseheath has strongly supported the competition, which is open to horticulturists aged between 16 and 30, for many years. We encourage as many students as possible to take part and have had national finalists in previous years. We also hosted the national finals last year.

Sue Nicholas, Young Horticulturist of the Year Action Group Chair, said: “We were delighted to bring this competition back to Reaseheath and have been very impressed with the new facilities here.

“Over 2,500 young people are eligible for this competition. Those who have qualified for the regional final here have done really well and should be congratulated.”