Sporty pupils from Millfields Primary School in Nantwich gained top tips from the future stars of Crewe Alexandra FC at a football tournament at Reaseheath College.

The tournament was part of an assessment for Crewe Alex apprentices, who are studying for a BTEC sporting qualification at Reaseheath alongside their training programme with the club. As part of their education programme the apprentices had to run an introductory skills session for the pupils and then organise and officiate a tournament. 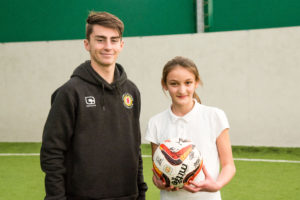 A mixed group of 30 Millfields pupils from years 5 and 6 took part in the event, which was held at the Crewe Alex Academy training ground adjacent to Reaseheath’s campus. At the end of the tournament, top players Imran Rahman, aged 10, and Esme Brayford, 11, were presented with signed balls.

School head Phil Whelan said: “This was a great experience for the children. They all had a fantastic time, playing football and generally enjoying themselves, and were well looked after by the apprentices. We’d love to come again if the opportunity arises.”

Promising apprentice Owen Dale, who trains with Crewe Alex First Team said “I enjoyed coaching and officiating in the tournament as part of my college course, it was nice to pass on some of the skills I’ve learned and is good preparation if I decide to go into football coaching later in my career.”

Reaseheath Course Manager Lauren Goff added: “The apprentices really rose to the challenge and wore their Crewe Alex badge with pride. This was a win-win effort, as it gave the apprentices the experience of a real life situation while the Millfields pupils benefitted from seeing a professional club’s training facilities and taking part in an action-packed session.

“We could be offering further football opportunities for primary schools in the future.”

Twenty three Crewe Alex apprentices helped to organise the tournament, and all passed their assessment. All are studying part-time at Reaseheath for a BTEC Level 3 Diploma in Sports (Performance and Excellence) which prepares them for alternative careers in professional sport. The qualification is well recognised and five apprentices have been accepted into high flying universities to study sports related degrees.

Reaseheath has been working in partnership with Crewe Alex for some years to provide an all-round education for the club’s apprentices, who gain the best grades in the country.  Subjects for study this year include sports massage, analysis of sports performance and technical and tactical skills in sport.

Find out more about studying sport at Reaseheath here.