Future farmers urged to get involved with politics

You are here: Home1 / Reaseheath News2 / Future farmers urged to get involved with politics / Events3

Reaseheath College’s next generation of farmers have been urged to speak out about their concerns going into Brexit by local MP Antoinette Sandbach. 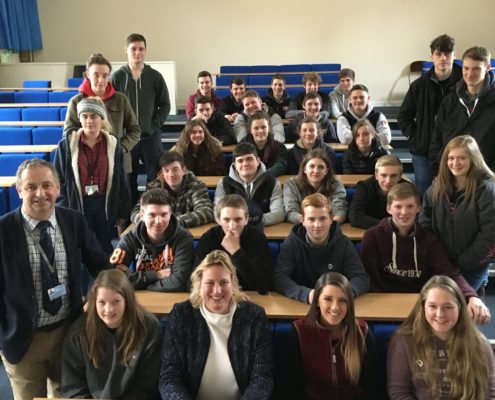 Speaking at a lively Q and A session with Level 3 Extended Diploma in Agriculture students, the MP for Eddisbury  – which includes Reaseheath – answered questions such as how she believed the Government could secure the best  deal for farmers and how farming subsidies might fare under Brexit.

She also discussed the importance of migrant labour to the food production industry and the need to protect rural communities and businesses.

Ms Sandbach warned: “The continuation of farming subsidies is one of the most controversial issues we face, particularly among hill farmers who rely on them for vital cash flow.  Although these will remain in place until 2020, it is very difficult to predict what will happen after that, as we don’t know what the Government will have negotiated.”

Ms Sandbach, who was previously Shadow Minister for Rural Affairs in the Welsh Assembly, admitted that she had voted to remain in the EU as she felt Britain would be in a stronger position to influence member states, but she also agreed with voters who wanted a ‘more British’ approach to farming, with fewer regulations.

Describing the current uncertainties faced by politicians and her personal efforts to support agricultural and rural life, which include fighting for better broadband and more affordable housing, she urged the students to speak out about issues which concern them.

“Get in touch with your local MP, make your voices heard.  If you don’t take the opportunity now, policies could be developed which don’t support your needs,” she warned.

“The UK has shown it is prepared to take the risk of coming out of the EU. It is now the job of the government to minimise the risk to the economy. We have some of the best entrepreneurs and inventors in the world, we have the ability and resources to get through it, but it’s important that you consider your futures carefully and let your MPs know what matters to you.

“For instance, you now have a fantastic opportunity to lobby for subsidies on eco system services, which will help to conserve our environment. You also need to speak to your local MP if you feel strongly that the sale of council owned farms is affecting first time farmers.”

The event was organised by the Nantwich college’s agriculture department in partnership with the NFU Cheshire branch and followed a talk to students last year by NFU Vice President Guy Smith.

Said NFU County Advisor for Cheshire Helen Wainwright: “This was a fantastic opportunity for Reaseheath’s students to understand the importance of politics and to learn that you have to make yourself heard if you want to change or influence policy.”