The 18 year-old, who lives near Congleton, took the top award in the Young Kennel Club’s (YKC) Pre-Beginners Good Citizen Stakes after she and Poppy completed a flawless round. The pair also made the final of the YKC Handler of the year class. And it wasn’t just Poppy who came under the spotlight, as Paige and another of her dogs, a bearded collie called Puzzle, qualified for the final of the YKC pastoral stakes. 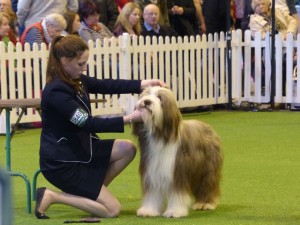 Paige shows off Puzzle in the pastoral showing class

“I was very pleased with both of the dogs,” said Paige. “This was the first time I had competed in an obedience class at Crufts so I was quite nervous to start with, but we had an almost perfect  round which made me feel confident that I’d done well.

“While Poppy is eight and quite steady, Puzzle is only two years old but he did everything I asked of him too. Crufts is my favourite show and this year it was really special.”

It is not the first time Paige and Poppy have been under the spotlight at Crufts – last year they won the YKC’s ‘Over 12 groom through’, and were  then awarded Runner Up in the YKC’s ‘Groomer of the Year’. They have competed at Crufts in grooming competitions for the past five years but this is the first year they have challenged the obedience category.

Paige has another three border collies at home and spends much of her free time training her dogs. She’s a member of the Danesford Obedience Dog Training Club in Congleton and the Dig It Dog Training in Sandbach, where she practices dog agility and competitive obedience. She also helps to teach dog training at club level.

Paige has almost completed her Level 3 Extended Diploma in Agriculture with us and originally thought of entering dairy herd management. But now we’ve launched a Foundation Degree in Canine Training and Behaviour she is considering widening her canine skills and possibly turning her hobby into a career.