My name is Ellie Forrester and I am a mature student studying for a BSc (Hons) in Wildlife Conservation and Ecology. I am about to embark on my second year of study at University Centre Reaseheath (UCR).

Firstly, a key bit of advice I would give to any mature potential students considering a degree in the ecology sector is –  it’s never too late to learn!

My interest in wildlife was reignited again five years ago when I was given a compact digital camera for my 21st birthday. I have long admired the work of wildlife photographers and was determined to have a go myself. I began researching British butterflies as my first subject and learned how endangered they have become as a result of the human impact on the environment. In that moment I decided that, not only did I want to take photographs of wildlife, but also to do more to preserve it. At the same time I caught the bug for bugs, as butterflies introduced me to a whole array of 6 legged invertebrates, such as dragonflies, ladybirds and grasshoppers. 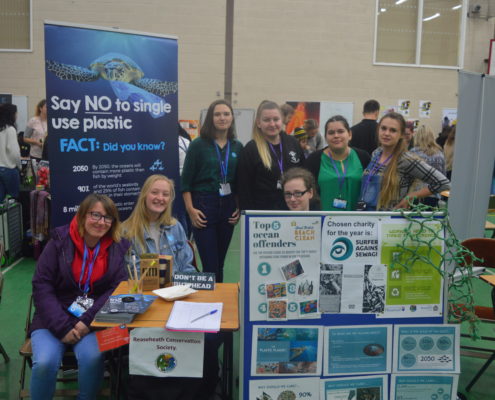 The Conservation Society all set up at Freshers Fair

As well as developing my interest in entomology, I started to take action and to get involved with volunteering at my local wildlife trust. I participated in a variety of activities, from educating young people to going out coppicing with the work parties on nature reserves in Shropshire. Through doing this volunteer work I established many networks and found out about different organisations and charities offering similar opportunities. At the moment I am working part-time as a data entry assistant for a small secular conservation charity called ‘Caring for God’s Acre’. Their aim is to preserve the biodiversity and heritage of cemeteries.  I am helping them to develop a database in which members of the public and those in the ecology sector can find information about the wildlife in their local cemeteries.

My long-term aspirations upon finishing university are to work in both the media and education side of the wildlife ecology sector. Since 2015 I have been freelance writing for a variety of national magazines and online blogs, which include Countryfile.com, Country Living and Bird Watching. At the beginning of this year I decided that I would start putting my articles and photography portfolios together to offer to editors. Ultimately, I would like to be a writer and photojournalist and am hoping to undertake a year course offered by the National Trainee Journalists Association.  Ideally, this would lead to a position as a staff writer for a local or national magazine and also increase my freelance work. Another aim is to setup an ecology business called, ‘Nature in Hand’. Its sole aim would be to work with children and young adults with both learning and physical disabilities, as well as those from deprived backgrounds and with mental health issues. The idea is to engage people in nature by offering workshops and wildlife activities in their local area.

Aside from my degree at UCR I’m also an active member of the Reaseheath Conservation Society. I’m really keen to promote the work we’re doing throughout the year, so my plan is write regular updates as part of my blog. I look forward to writing an introduction to Reaseheath’s Conservation Society very soon!