Reaseheath horticulturists prove they are top of their tree 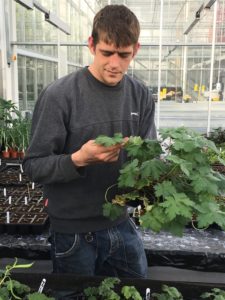 Nathan Foulds at work in our industry standard glasshouses

Reaseheath students have proved they are top of their tree by taking top places in the prestigious Chartered Institute of Horticulture’s ‘Young Horticulturalist of the Year’ competition.

The demanding competition, held at Derby College, tested the breadth of the contestants’ knowledge over ten hard fought rounds with the quickest off the buzzer gaining valuable points.  The competition was intense through to the final round, with a number of contestants in contention for the first prize.

Nathan, who won £150 and a spade and fork provided by Bulldog Tools, has now qualified for the national final and a chance of winning a £2,500 travel bursary which is sponsored by the Shropshire Horticulture Society through The Percy Thrower Trust. He will join seven other finalists at the University Centre, Shrewsbury, on Saturday May 6.

Nathan, a 28 year-old father of four has just launched a garden landscaping and maintenance business, ‘Franklee Gardens’, in his home town of Macclesfield.

Nathan plans to continue building up his professional qualifications by progressing onto our RHS Level 3 course next Autumn and has been awarded funding through the Professional Gardeners Trust. He formerly worked in retail but has changed career to follow his passion for plants.

Admitting to being nervous in what was his first horticultural competition, Nathan said: “I was very surprised to win, but really delighted. The knowledge and skills I’ve learned during my studies at Reaseheath really helped me and it was nice to have the support of my tutor and family.”

Reaseheath strongly supports the Young Horticulturist of the Year Competition, which is open to horticulturists aged between 16 and 30, and we have had national finalists in previous years.

Sue Nicholas, Young Horticulturist of the Year Action Group Chair and Regional Organiser said: “Over 2,500 young people are eligible for this competition. Those who qualified for the regional final have done really well and of course Nathan should be congratulated for his success in getting through to the national final. We wish him and the other finalists well.”