Reaseheath College has named North West Cancer Research as its chosen charity of the year.

Students at the leading land-based college in Nantwich voted for the charity after learning of its commitment to supporting cancer research in the North West.

Members of Reaseheath’s Student Association plan to raise more than £15,000 for North West Cancer Research over the next 12 months by hosting a series of fundraising events. Already planned are several band nights, a staff versus students Tough Mudder challenge and a Halloween cellar tour.

The students will also support the charity in its awareness raising campaigns which run throughout the year, such as its #suncreamselfie campaign, which highlights sun safety and skin cancer symptoms.

The funds they raise will go towards potentially lifesaving research at universities in Liverpool, Lancaster and Bangor. Projects currently supported by North West Cancer Research include the improvement of skin cancer drug treatments and the use of proton beam therapies in the treatment of patients with head and neck cancers.

Student Association RAG (Raising and Giving) Chair Tom Allen, a BSc Wildlife Conservation and Ecology undergraduate, said: “Cancer is a horrible disease which unfortunately touches so many people. We all know someone close to us who has sadly been diagnosed with cancer, or lost a loved one to it.

“As a student group we have always been keen to support local causes and charities which make a real impact to our everyday lives. When we learned of the work which North West Cancer Research does to fund lifesaving research, we knew it was a charity we wanted to support. Knowing that the money we raise will help researchers who are based locally, and that this research could potentially help people on our doorstep, was really important to us.

“We are looking forward to raising money for the charity and doing our bit to support cancer research. It’s important that we do everything we can to help give more people a chance to survive cancer, which is why we hope to raise as much money as possible in the next year.”

Over the past 28 years, students and staff at Reaseheath College have raised more than £248,000 for local charities.

Bobby Magee, fundraising manager at North West Cancer Research, said: “We are proud to have been selected as Reaseheath College’s charity of the year. Support from community groups is crucial to our fundraising as it enables us to engage with the wider community and pledge more funding for research.

“Cancer will affect one in two of us during our lifetime. Today, thanks to research, half of all people diagnosed with cancer will survive. With the help of supporters like these students, we can help eliminate cancer and save more lives sooner.”

North West Cancer Research is the biggest independent funder of cancer research in the North West and has committed to funding more than £13 million worth of research over the next five years. 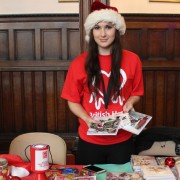 Merry Christmas from the SA