You are here: Home1 / AB Vista 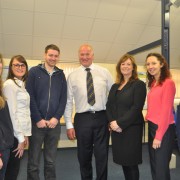 ‘Use technology to drive the agricultural industry forward, embrace science, be innovative and never stop learning’. This was the key advice given to Reaseheath College students at a ‘question time’ discussion looking at careers in agriculture and food production.

The event, sponsored by the Food, Drink & Agricultural Group of the Chartered Institute of Marketing and organised by Reaseheath’s Agricultural Development Academy (RADA) and agricultural department, highlighted the opportunities available in the industry including business start-ups, and the attributes employers are looking for when recruiting. 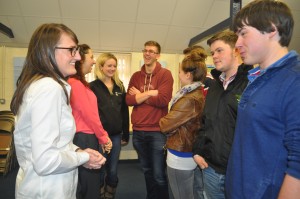 A recurring theme, supported by all panel members, was that technology is vital for the future of the industry and that careers should be geared towards this constantly evolving science. Degrees were deemed to be important, particularly as they opened the door to graduate schemes in associated industries, but ‘soft’ skills such as reliability, work ethic and enthusiasm were seen as equally essential from an employer’s point of view.

The panel were also unified in their view that partnerships and co-operatives could well sustain the agricultural industry in the future, and that diversification into niche businesses could be a good route to success. Efficiency was key to profitability.

Ray Brown, himself a former Reaseheath agriculture student, advised: “Go for what you enjoy …. but you need to strive to be the best to survive”, while Joanne Butterill  emphasised: “Building rapport with the people who are going to support you is key. Your personality is as important as your CV.” She also pointed out that banks were willing to support farming businesses provided they were presented with a clear business plan and cash flow forecast.

Responding to a question from student Matt Brown as to what the NFU was doing to encourage the next generation of farmers, Ray Brown said efforts were being made to deliver more power into the hands of producers and spoke positively about local food procurement centres which would source food from local businesses and encourage knowledge transfer.

Answering a question as to how ‘Cheshire Women in Dairy’ was encouraging females into the industry, Barbara Hughes described the association’s monthly meetings when best practice and ideas were shared. The panel were in agreement that British society was dictating a shift in perception and that it was now far more acceptable for women to be in the industry. 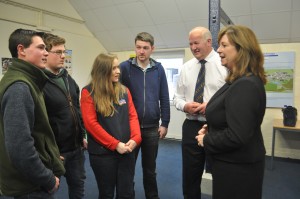 Asked how she became a senior consultant, Emma Hancocks said that she had found it very beneficial to work her way up ‘from the bottom’, gaining rounded skills, but that the research which formed part of her degree had proved important to her progression.

This view was supported by Jamie-Leigh Douglas, who said that a background in science and technology could lead to excellent progression in the global animal feeds industry.

In conclusion, Ray Brown emphasised: “Although there is an oversupply at the moment, there are seven billion people in the world and this will increase to nine billion in 20 years. The demand for agriculture produce will increase and the next generation needs to look at producing food which is local, fresh and usable.

“The value of technology such as robots and sophisticated machinery isn’t negative. They help you to do your job better by freeing up time. The future of farming is in the hands of the next generation – and we need our young people to continue learning and then sharing their knowledge, best practice and experiences.”