You are here: Home1 / Construction / Events2 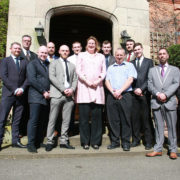 Reaseheath has been awarded the Armed Forces Covenant Employer Recognition Scheme BRONZE AWARD in national recognition of our commitment and support for former and current military personnel. 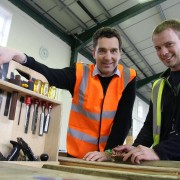 Crewe and Nantwich MP Edward Timpson built on his skills when he joined construction apprentices during lessons at Reaseheath College last week.

The Minister for Children and Families visited the Nantwich college as part of National Apprenticeships Week, a celebration of the benefits that skilled apprentices bring to businesses and to the national economy by increasing productivity and providing workforce succession. 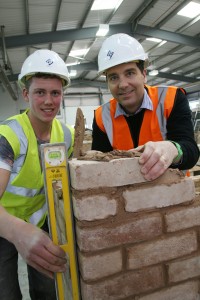 Mr Timpson tried his hand at bricklaying and joinery in Reaseheath’s tailormade workshops and chatted to successful apprentices who are learning their trade at college and in the workplace.

After working alongside Adam Platt, 17, a bricklaying apprentice employed by Greg Lambert Ltd in Northwich and James Lewis, 18, a site carpentry apprentice who works for his father’s building company in Stockport, Mr Timpson said: “Mr Timpson said: “Our growing economy requires a skilled construction industry, and these young people have very valuable skills to offer. The trade offers a great career path, so it’s good to see Reaseheath putting apprenticeships at the heart of their education and training programme.

“We know that apprenticeships provide a fast route into employment and can offer real-life experiences along the way. They are an excellent option for both students and employers, and I am delighted that over 5,000 have been started in Crewe and Nantwich since 2010.”

For further details of Reaseheath’s courses in joinery, brickwork and plastering visit www.reaseheath.ac.uk/construction or phone our Courses Hotline on 01270 613242 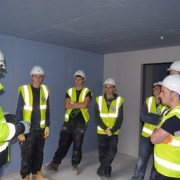 Reaseheath plasterers have been gaining industry tips and experience during their latest site visit thanks to Perkins Plasterers of Stoke-on-Trent.

Perkins Plasterers invited students to visit one of their larger projects, an 80 apartment retirement village site. During the visit, students had the opportunity to see a range of skills and attributes plasterers require for success within the modern construction industry.

All of our plasterers sat through a thorough site induction, which was excellent, as it helped to bring aspects of their health and safety theory module to life.

Due to size of the site, students were able to see apartments at a variety of different construction stages. They were treated to demonstrations of a range of different plastering practices and techniques including floor screeding, metal partitioning, plasterboarding and skimming walls and ceilings. 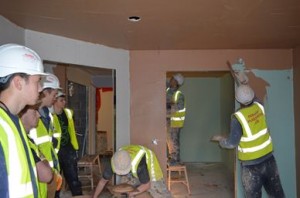 Students also had chance to ask lots of questions, of which they had plenty – in particular for the plasterers of course!

We were also fortunate enough to welcome Perkins Plasterers to our recent construction careers event, held on campus. Members of the Perkins’ team kindly joined other industry representatives, former students and the construction team to discuss construction courses and careers with our visitors.

For more information on our Construction courses visit our website. 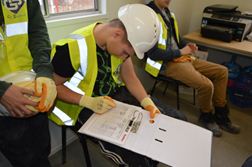 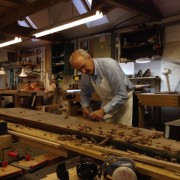 Alumnus Tony Bramwell recently contacted us with a delightful tale about about his experiences of studying at Reaseheath. Here’s his story: 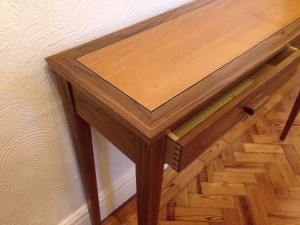 Back in 2011, I signed up for evening classes in Joinery at Reaseheath, with the aim of brushing up on my DIY woodworking skills. I enjoyed the course, so I enrolled in a longer ten week class. Our lecturer, Dave Allman, encouraged us to bring along any ideas. I came to the class with plans for a hall table that my daughter had asked for. Dave was really positive about the project and immediately set about explaining how to make the different joints, where to source the timber and so on. He remained supportive throughout, and the end result was a lovely oak table that I was able to present to my daughter, much to her delight. 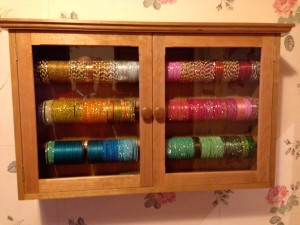 But something more happened. I found that the three-hour class seemed to be over in an instant as I became completely engrossed in designing, cutting shaping and assembling the timber, supported by Dave’s constant and unwavering enthusiasm.

I realised that this might be the activity I had been looking for as a way of making good use of my forthcoming retirement, and I began to look at the possibility of taking this up as a craft. As a result, immediately after my retirement in 2013 I signed up for a full time one-year course in designing and making fine furniture with a master craftsman near Oxford. This was a wonderful and deeply rewarding experience; you can see two examples of the pieces of furniture I made in the pictures below, and I am now building my own workshop so that I can pursue this wonderful activity full-time.

It all came from a short course in Joinery at Reaseheath, and the wonderful enthusiasm of our lecturer, Dave Allman, to whom I will always be grateful. 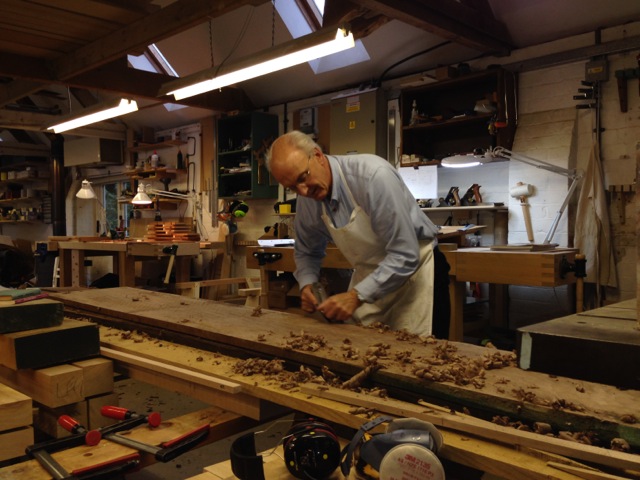 Inspired by Tony’ story? Find out more about the range short-courses currently on offer in our Construction department here. 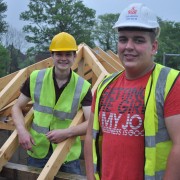 Advanced carpentry apprentice Matt Williams, 18, won the senior carpentry and joinery section in the north west regional round of Skillbuild and qualified for the national final in September. Winners from there may go on to represented Britain in WorldSkills International, a global event which in 2015 will be held in Rio de Janeiro, Brazil.

Advanced bricklayer Dave Ford came third in the senior bricklaying section and remains in contention for the final while advanced bricklaying apprentice Leonard Thomas impressed the judges but missed out on a place in the same section.

The regional round, held in Burnley, was for college trainees aged 21 and under and attracted entries from colleges from throughout the north west. The contestants had to interpret a drawn plan and demonstrate a range of skills on different challenges over a five hour period.

Matt, who attends Reaseheath on day release, is a site joiner for Ewson Contractors of Malpas and lives in Whitchurch.

He said: “A lot of good joiners took part in the competition and I was really surprised to win. I just tried to remember all the tips that my tutors had taught me.”

Dave Ford, 19, of Northwich is currently a full-time construction student at Reaseheath while Leonard, 19 is a bricklayer for Farmer and Tapley Ltd of Market Drayton and lives in Childs Ercall.

Construction Instructor Danny Collins, who has organised Reaseheath’s Skillbuild teams for the past seven years, said: “The students represented Reaseheath extremely well and the whole department is very proud of their achievements.

“The competition was very stiff but they all gave a very good account of themselves and gained valuable experience at the same time. We were delighted that the outstanding quality of their work was recognised by the judging panel.”

Find out more about Construction courses at Reaseheath here.