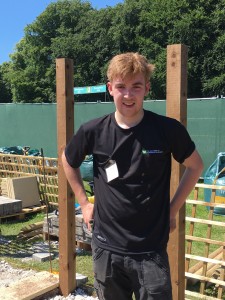 Aaron, 17, who is studying for his Level 3 Extended Diploma in Horticulture, demonstrated his technical skills in block paving, decking construction and plant placement at Tatton alongside six other young landscapers.

This year the quality of work and attention to detail was so high that all competitors have qualified for the final, to be held at The Skills Show, Birmingham, in November.

Jody Lidgard, APL lead judge and trainer, said: “We have a lot of young talent moving up through the ranks and producing work to a good, professional standard. This is very pleasing as we are putting all our efforts into standardising and improving the skills coming into the industry.”

Aaron, a former Weaverham High School pupil, said: “This was a real challenge over three days against very strong competition but it was a great opportunity for me to show off the technical skills and knowledge I’ve gained during my studies at Reaseheath. I really enjoyed it and am looking forward to doing more training in preparation for the finals.”

Hopefully Aaron will follow in the footsteps of former Reaseheath Level 3 Extended Diploma in Horticulture student Matt Beesley from Winsford, who was a member of the GB WorldSkills squad in Sao Paulo, Brazil, in 2015 and successfully brought home a silver medal – Britain’s first ever medal in garden landscaping.