At 17 one of the youngest garden designers ever at the prestigious horticultural event, Nathan was supported in the garden build by Reaseheath trained apprentices and staff from Hultons Landscapes.

His striking garden ‘Sitting below the Mulberry Tree’, in the back-to-back category, is designed for young people with life limiting illnesses and will be relocated to Claire House Children’s Hospice, Wirral, to be enjoyed by families from throughout the north west. 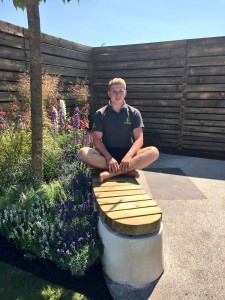 Nathan Webster on his show garden

Nathan, who has just completed the first year of his course, is planning a design and build career with Hultons, which is owned and run by his father Lee and sponsored the show garden.
Other members of the build team included Ian Rowbottom, a current Reaseheath horticulture apprentice and Tom Roberts, who completed his apprenticeship in Plant Maintenance with us last year. Reaseheath trained former apprentice Tom Pennington and Rory Littlewood, who gained his Level 3 Diploma in Horticulture with us ten years ago, were also part of the team and Theo Wilson, one of Nathan’s current fellow students, helped with the build. 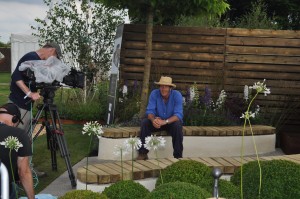 Designed to give families an accessible and peaceful seating area, the garden offers two serpentine shaped benches and a water cascade which falls down the retaining wall to collect in a ground level pool.

Nathan, who gained valuable experience at RHS Flower Show Tatton Park last year working alongside gold medal winning designer Pip Probert, said: “The atmosphere at RHS Tatton is amazing. I really enjoyed it last year but this year is different because I’m here with my own design and working with our own apprentices and staff. I’ve also learned a lot of technical skills during my course at Reaseheath.”

Lee Webster, who was previously Operational Director of the Landscape Group before launching Hultons, commented: “Designing and building a garden for RHS Tatton Park gives us a fantastic opportunity to show off the skills and talent of our rising stars. Apprentices and newly qualified horticulturists and designers are a fundamental resource for the horticultural industry. We’re currently facing a massive skills shortage and this show gives us a platform to remind visitors of the well paid range of careers which are available.”