Reaseheath College sports performance, adventure sports and public services students made a special effort to mark British Cycling’s Tour of Britain by getting involved in a giant piece of aerial artwork alongside the competitors’ route.

About 80 students formed the moving wheels of a 100 foot long bicycle laid out on a field opposite the college’s main entrance on the Worleston Road, just outside Nantwich. The event was timed to coincide as the elite athletes, who included Sir Bradley Wiggins, passed the college during Stage Three of the prestigious road cycling event.

He said: “This was the students’ first day at college and it was a great opportunity for them to take part in a team building activity with a difference. Reaseheath’s Farm manager Mark Roue kindly gave us permission to use the field and also allowed us to use plastic haylage wrap to make the bike frame.

“Awareness of all types of sport is growing thanks to the Rio Olympics and it was a great way for the students to be part of a premier event. The aerial artwork looked amazing and was an exciting activity to mark the race as it passed through Cheshire.”

Watch our video to see the aerial artwork in action!

Image header caption: Students from Reaseheath sports department form a giant cycle as riders in the Tour of Britain pass the college’s entrance 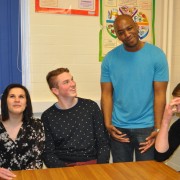 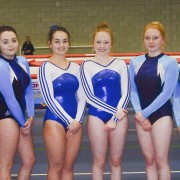